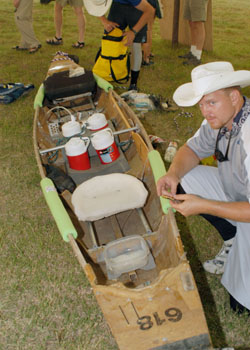 Tandem Unlimited is a class that is just like Unlimited, but for two paddlers. In the not-so-distant past, the Argosy Cup was won by unlimited boats with only two paddlers – for example, in 1986 and 1987 when two-person boats won the race in under 36 hours. Then 3-person craft began to appear and it escalated from there. This class was added to provide a niche for some of the great boats that simply could not hope to compete with 4-plus person teams.

There shall be no specification as to the type of craft used except that such craft must be propelled only by human muscle power and limited to two entrants.